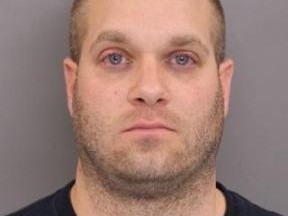 A Baltimore County police officer was charged with burglary and assault in an incident in Edgemere Monday, the police department announced. Frank Wilcox, 35, was arrested and suspended without pay after he forced his way into a home in the 7400 block of Blevins Ave. about 1 a.m. and pushed someone